The Ultimate Guide to Your Summer in Belgrade 2k18 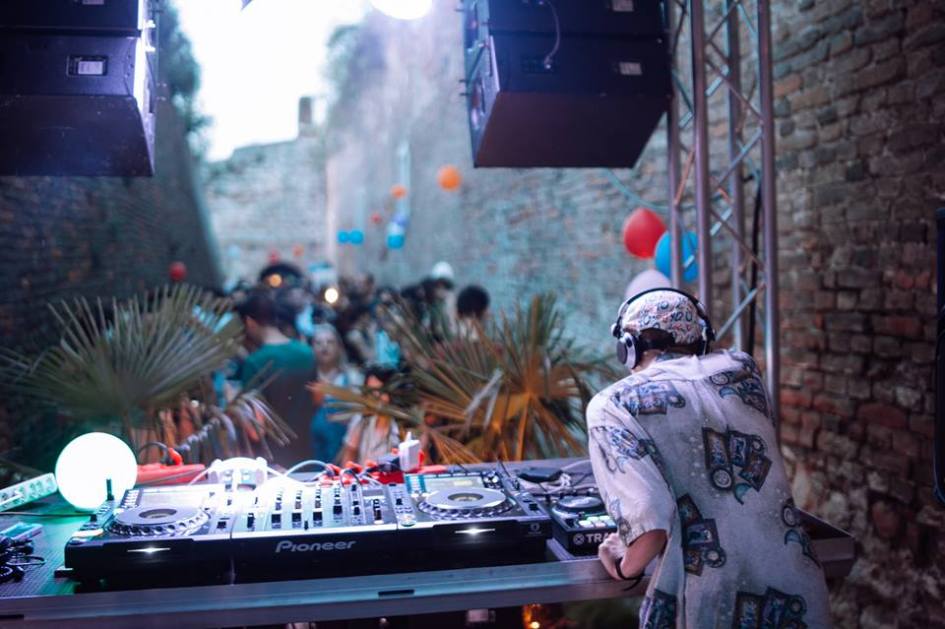 What’s going on in summer time? Fun days by the water, warm evenings spent on floating bars, outdoor cinemas on rooftops and crazy nights out in the city –  Belgrade is in high season all summer long. Here are the hottest tips for your sunny days in Belgrade. Enjoy! 😉

Belgrade never sleeps, but in the summer, it is even more awake and I love it. Therefore, nothing better to do than enjoy the hot days and nights at open air clubbings. And Belgraders definitely know how to do it. There are venues which give access to their outdoor areas while others start their outdoor season. Try and hit at least one party on each of this locations. Tip: Make sure to check each venue’s Facebook page for the upcoming event. 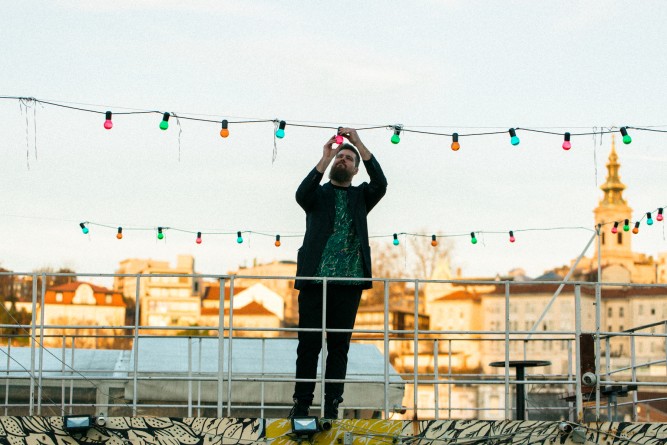 Located by the Sava, club 20/44, draws in techno-lovers all year round. I like it the most during summer because dancing outside on the deck while watching the sunrise in combination with the river feels like some kind of magic. There is a fantastic view on the Kalemegdan Fortress and the shiny Branko’s bridge. No wonder that it can be found on The Guardian’s ’25 best clubs in Europe’ list. The boat, how locals use to call it, organizes also matinées and afterworks serving home made fish soup or barbecue accompanied by DJS. Next party recommendation: Kristijan Molnar All Night long.

The Secret Garden of Drugstore 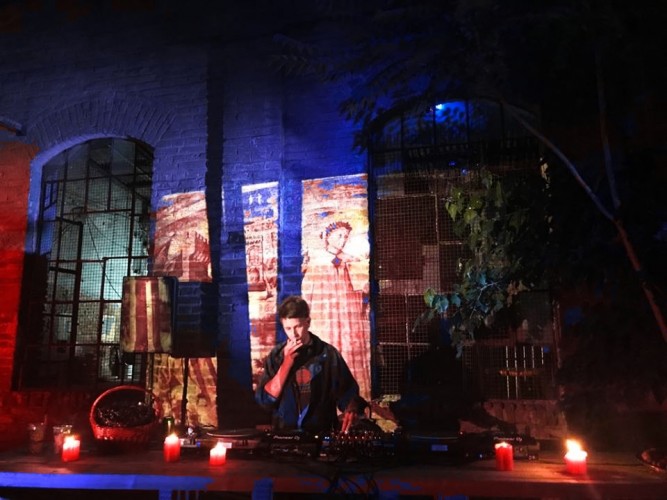 Drugstore is the techno cathedral that the locals can’t get enough of. It’s difficult to imagine Belgrade without it. The real treasure is the secret garden, where the party moves during the summer season. The location is just few meters away from the main entrance. And it’s definitely an experience on its own. Drugstore is known for its underground energy and the unrivalled atmosphere. The garden has plenty of chill spots and nice lights. It’s a great place for locals and visitors to dance until dawn. If you wanna go to an early party, surf it is. 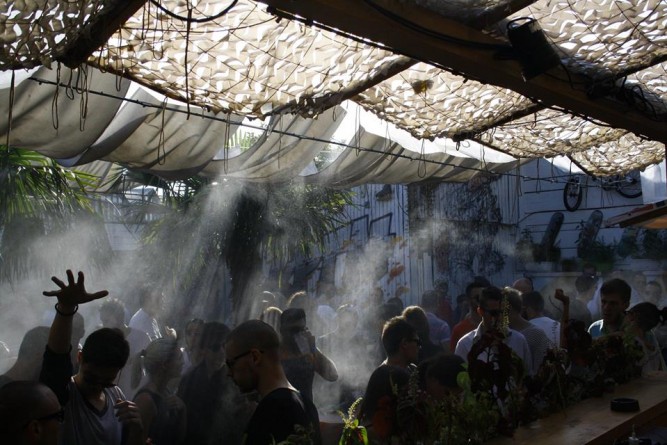 Hidden in the industrial part of lower Dorćol lies a former skatepark, which turned into a club over the years. KPTM offers a wide range of parties, from hip hop to drum & bass, including electronic music, progressive trance, dance hall and queer nights. The open air parties during the summer months start from 5 pm and afterhours begin at 4 am. It’s the prefect spot for low-key raves, just a few drinks or a proper after hour. Fun fact: KPTM is the short form for ‘Koliko para, toliko muzike’ which translated means ‘You get what you pay for’. 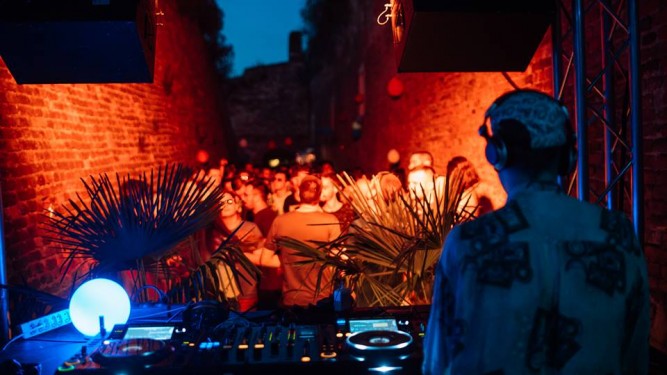 Headroom and Barutana are two open air clubs, which are located next to each other in the heart of the Kalemegdan fortress. The green space surrounded by the fotress’ walls is an exciting dance location and gives me that Game of Thrones feeling. In fact, it was a gunpoweder’s house in the 17th century. During the summer months different electronic music parties and other events take place in here.

Belgrade is located at the confluence of the Sava and Danube rivers. The river banks are dotted with floating rafts, which were turned into a range of coffee places, bars and clubs. Hanging out or cool down with a cocktail during hot summer days is a must. 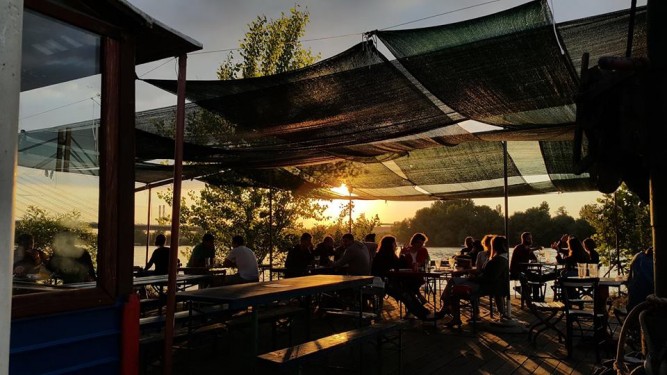 Brodić, which from Serbian translates as little ship has been around for over 20 years and is still one of Belgrade’s hidden gems. This place doesn’t look very attractive from the outside  but once you’re on the raft, you will quickly appreciate that Brodić has that ‘something’. The little ship offers  refreshing drinks, a holiday atmosphere and a good pizza (kitchen is open 13:00 – 22:00). Even more so, watching sunsets from there is magical and what’s more they serve Moritz Ice Cream. 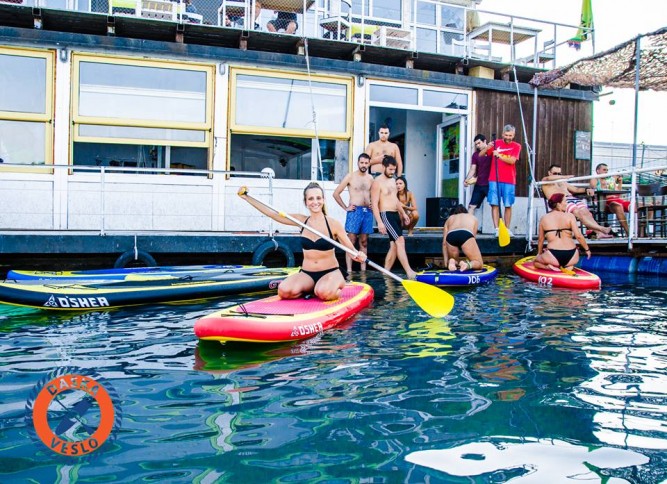 Besides delicious snacks and drinks, Daska&Veslo offers stand up paddle lessons. You can choose between a tour around the Great War Island (1200 RSD, 3 hours) and a sunset tour which includes a ride to the Kalemegdan Fortress (900 RSD, 2 hours). 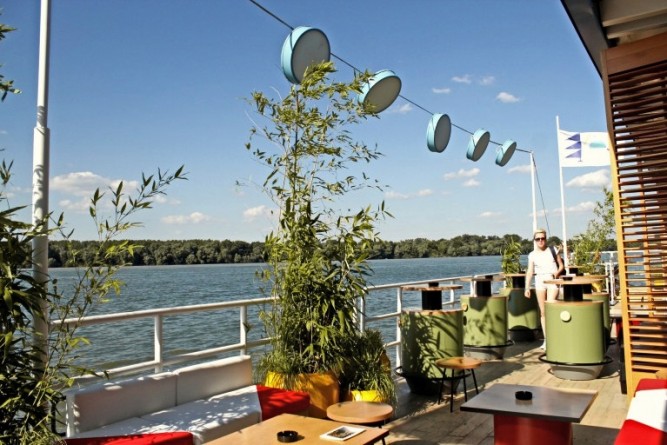 Pristan is a DJ harbour for summer and river lovers. You will find it at the Danube quay in lower Dorćol, which is also known as 25. Maj. This beautiful float hosts sunset Drippin’ Parties. Read more…

Summers in Belgrade are pretty hot. Luckily, the city has a lot to offer to water-lovers and sunbathers. In this case, river islands are the new beaches. One of the most popular beaches is Ada Ciganlija. It may be interesting for visitors but it is way too overcrowded for my taste. If you look for something more exotic, you should try the islands located on the Danube and Sava rivers. 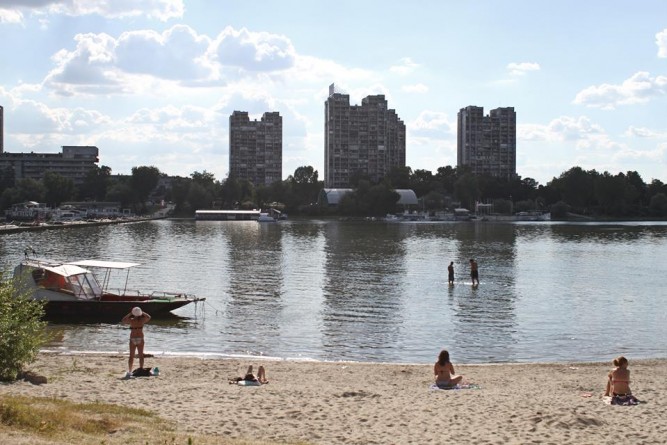 The Great War Island is located on the confluence of Sava and Danube rivers and was a strategic defense point through history. Nowadays, you can feel the sand between your toes on the island’s northern tip, called Lido beach. It can be reached by a bridge set up in summertime or by a taxi boat at the Zemun Quay. Untouched nature, holiday shacks and over hundred bird species, including endangered ones can be found on that island. Drinking at the beach bar or exploring the wild nature are options for those who don’t like sunbathing. 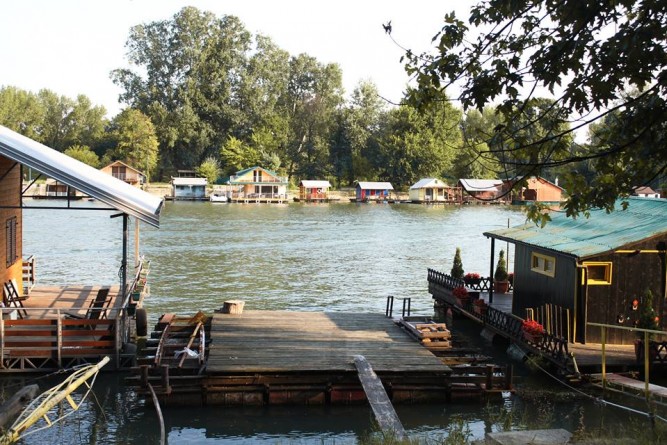 Ada Međica, called the oasis of peace, is the perfect place to escape from the hot city. The island is one kilometer long and 200 meters wide. Located between Ada Ciganlija and blok 44, it has an interesting architecture with all its holiday cabins, pile dwellings and rafts. A little taxi boat brings you from New Belgrade (blok 44) within 2,5 minutes to the island. The departure is every half an hour during the weekends and every hour during the week (8-20h, 100 RSD). You can swim on Međica’s tip or have drinks at Mama Afrika, a very relaxed beach bar.

They say that Bela Stena (the white rock) has the most beautiful wild beach on the Danube. It is located 12 kilometers from the city center and only reachable by boat at Višnjička banja. 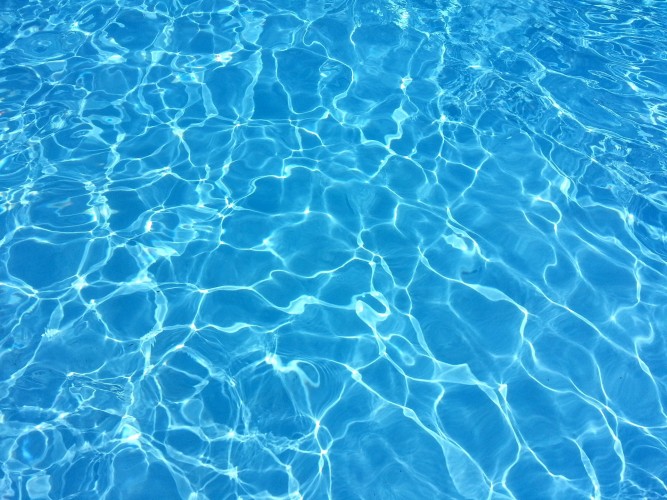 If you are more of a pool person, click here.

Planning your next adventure in Belgrade? If you’re on the lookout for something a little different, you’re in luck. Bellegrade offers alternative boat tours, where you’ll experience the city’s unique river life from a local’s perspective. From sunset cruises to hidden gem islands and floating bars, we cover it all.

Summer Events in the City 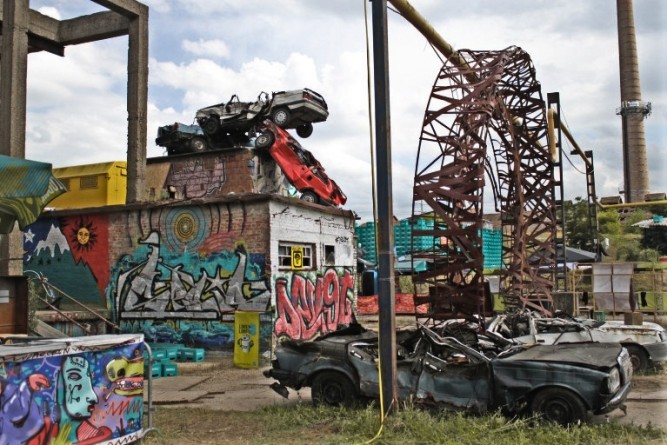 Dev9t (15.06 – 23.06.2018) is Belgrade’s most authentic, most creative, most beautiful, most inspiring festival ever. It takes place at Ciglana, a former nickel factory.

DEV9T’s concept is to fight for the survival of culture, because culture is inherently inhabited by all living beings. If culture is not preserved, we will become an endangered species, deprived of our existence’s meaning. Thus, this festival is a place where artists will be totally free to express themselves and to be creative at their own discretion. This way, DEV9T will turn from an artistic colony into a leading networking platform for artists, event managers, the audience and commercial sponsors, and that’s the festival’s goal. 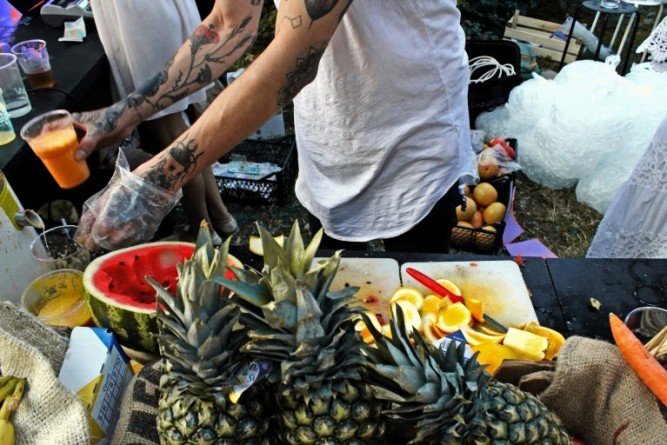 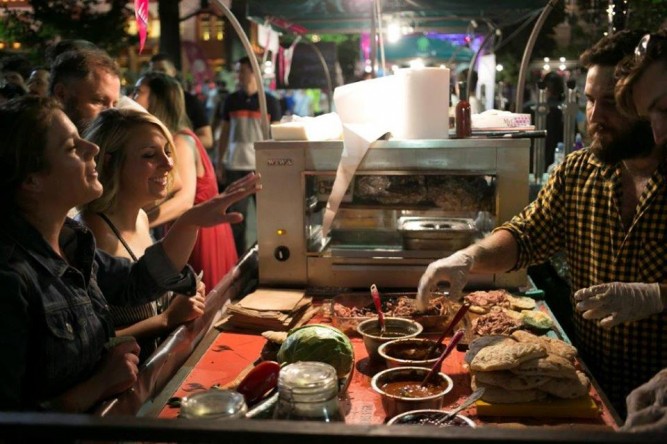 Besides that the Night Markets in Belgrade have an awesome program they also change the locations, so you might visit places you have never been before. They always take place on Belgrade’s most beautiful markets and offer delicious food, hand made stuff and a laid-back atmosphere. 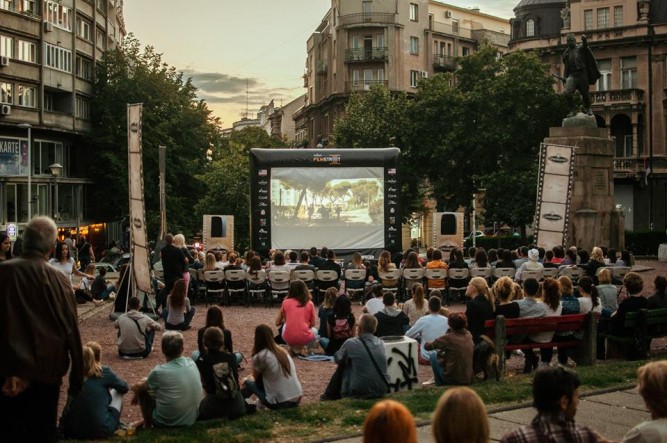 I can tell you that Film Street organizes cosy movie evenings on Belgrade’s most beautiful and most authentic locations. The grand opening will be on the 28th of June, in the Student Park showing Murder on the Orient Express.

Looking for a unique and alternative cinema experience? In the summer months open air cinema is the word for movie-fans in Belgrade. Enjoy charming outdoor screenings at Bioskop Nova Zvezda or on Kvaka 22’s terrace. A selection of independent films and blockbuster movies are waiting for you. 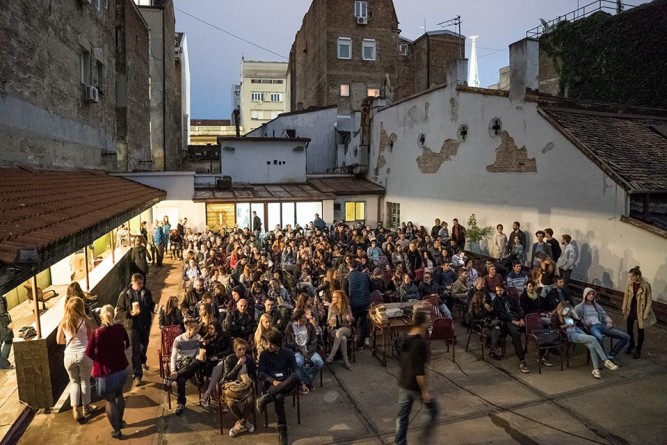 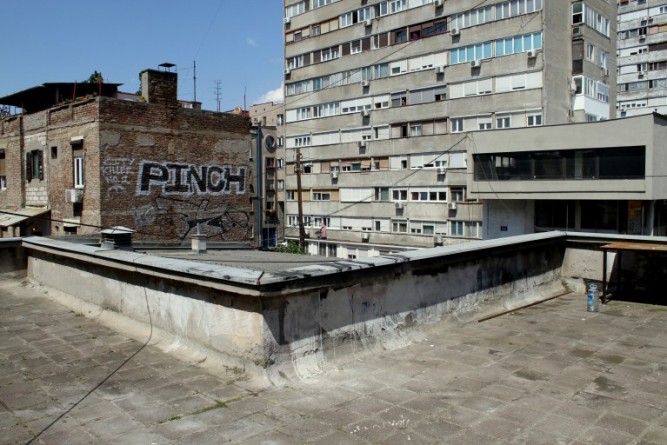